Cambridge University Amateur Boxing Club (CUABC) ‘Gown’ boxers lost an overall defeat at this year’s Town vs Gown event last night, with ‘Town’ fighters, who came from various boxing clubs across the country, winning by a margin Result of 10-5.

In preparation for the event, CUABC athletes had been vying since October for a chance to compete under the lights of the West Road Concert Hall, guided by the rigorous guidance of head coach Lee Mitchell and the volunteer coaching staff of Kevan Murphy, John Cafferkey, Will Davies, David Richards, Gary Davidson, Aiden Cope and Tim Benger.

Tasha Jeyabalan, CUABC’s 2021-22 women’s captain, praised the increasing presence of women boxers in the Cambridge rings: “The remarkable number of women’s fights that we have […] reflects the exponential growth of women’s boxing. The many new faces on the team have shown an unwavering determination and commitment to the grueling training program since their first taster session, while juggling their degrees and their social lives.” She continued, “I’m very proud of each and every one of them, who has shown the will and ability to improve in such a short space of time.” 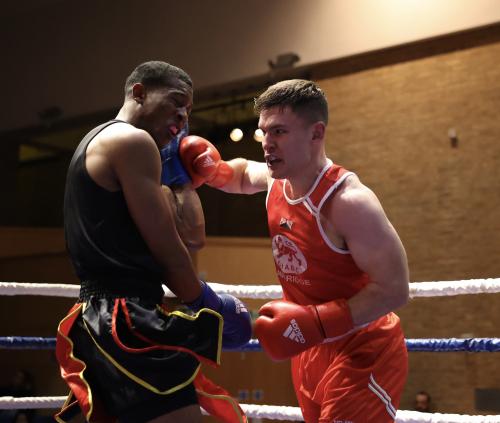 Meanwhile, CUABC men’s 2021-22 captain Ryan Lee spoke about the excitement surrounding boxing’s return: “While last year’s Covid may have dashed any hope of an active season, the 2022 CUABC roster is at full strength returned and looks more dangerous than ever. In particular, we’ve seen record levels of interest in the sport this season, which has enabled us to build a roster full of promising new talent and a wide range of boxing experience.”

As CUABC approaches its 126th anniversary, the club is one of the oldest amateur boxing clubs in the world and also one of the largest sporting clubs in Cambridge.

Turning to the first match of the night, Sophie “Shamrock” Mulcahy took on a tough opponent from up north. Despite a good start from Mulcahy, the Cambridge fighter seemed to tire early on as her opponent soon established a right-hand rhythm that proved to be too much. After the referee stopped the fight midway through the third and final round, CUABC suffered an opening loss by TKO. 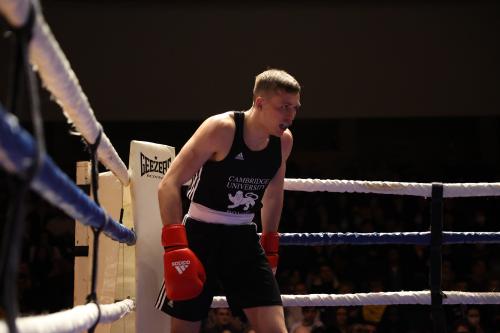 An all-CUABC affair ensued in the second fight, pitting Emily Dellon against Sybill “The Professor” Chen in a matchup that ended in a third-round TKO in favor of the faster and more agile Dellon.

Sophie ‘So-Fast’ McInerney collided with her opponent in the third fight of the night. Though McInerney managed to land some solid double jabs in the first two rounds, he failed agonizingly in the third after taking gory damage, resulting in the CUABC fighter losing after a tough unanimous decision.

Homerton’s Emil Ares got off to an impressive start in the men’s race, beating his opponent despite a slow start in the first lap. After better quality shots in the second round, Ares did enough to earn the win via unanimous decision. CUABC’s Imogen Sandford soon followed with a win by TKO after her opponent struggled with fatigue in round two, putting ‘Gown’ in the driver’s seat with a 3-2 lead. 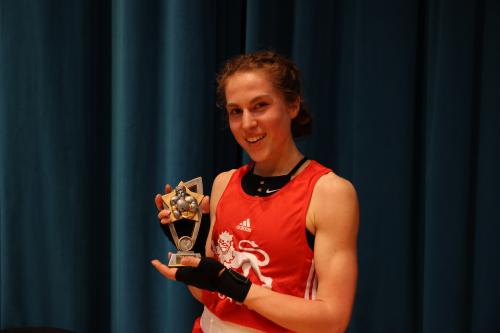 However, the home side endured a tough period of fighting going into the break. Ryan Moss put in an admirable performance against his opponent but found himself on the wrong end of some impeccable connections in the second round, convincing the judges to rule him unanimously.

In the seventh bout, CUABC Vice President Shizhang Liu suffered a loss by TKO in round two after being nullified by the fighter’s impeccable inside work in the opposite corner. Club veteran James “Jimmy Boy” Lee stepped into the ring moments later and faced an experienced opponent. Despite some superbly crafted turnarounds that allowed Lee to play heavily on the inside, the “Town” boxer held on and never allowed the Cambridge man to land a killer punch, resulting in a unanimous decision in his favour.

But in the last fight before the break, CUABC pulled the aggregate score back to a modest 5-4 as Michal ‘The Polish Prince’ Slowak executed numerous body shots that blew his opponent away just before the third round. Slowak managed to get in and out well throughout the fight, saving his energy and allowing him to wear his opponent down to a TKO loss. 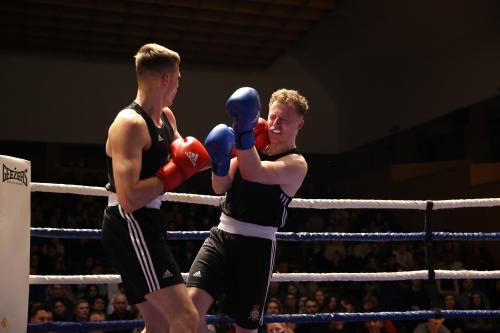 Tianyi Wang brought CUABC out of the break with fight number ten but unfortunately into a sixth loss. Wang often found himself leaning on the ropes and unable to muster a number of good shots, losing by two-decision. Ollie Rosen cruelly followed teammate Wang in defeat, losing by TKO in the second round. Although Rosen temporarily lost form in the first half due to his opponent’s clean footwork, a slight stumble in the second was enough to convince the official to abandon the game – a rather unpopular decision in the crowd.

Looking to regain her competitive footing, Cambridge turned to Fiorella ‘El Fuego’ Gallardo in the twelfth fight, taking on her opponent in the 58kg weight class. However, Gallardo struggled to find her rhythm in the face of some deadly right-handers from the woman in blue, resulting in a unanimous loss.

Fight number thirteen proved unfortunate for CUABC but spectacular for the crowd as President Will Appleby faced a fierce opponent who ruffled the Cambridge man in the closing moments of the first round. The ‘Town’ fighter landed a plethora of superb windmill punches straight out of Deontay Wilder’s handbook, leaving Appleby with a face more red than white when the referee decided to allow play not long after round three break up. In a fight worth the ticket price alone, Kendrick Lamar’s DNA smashed the floor post-fight as a fitting sign of the pair’s boxing genes.

Vlad Shutko faced another tough opponent in the penultimate bout of the night, losing via unanimous decision after missing venom despite his wild footwork.

As ‘Town’ ran away with the goal line and went into the final bout, Men’s captain Ryan Lee bravely hurled himself out of the Cambridge corner after the opening bell. Lee did a good job of catching his opponent in a half-stride while also using his height advantage by triggering several right-hand lunges that put the last “Town” boxer in trouble. After Lee drew blood from his opponent, the referee called off proceedings as early as the second round, again to the disappointing disapproval of the paying crowd, but awarded the CUABC man a TKO victory.

Despite numerous early stoppages in the fifteen bouts, Town vs. Gown 2022 proved to be a successful night for amateur boxing, drawing a hefty crowd consisting not only of Cambridge University students but also fans from across the country.

CUABC’s fighters will next be in action in the 114th Varsity Match on Saturday, March 5, where they hope to carve out a lead in the series, which is currently at a 54-54 standstill.

At the request of the Cambridge University Amateur Boxing Club (CUABC), the names and club details of each “Town” fighter have been omitted from this article.

We therefore rely almost entirely on advertising to fund ourselves and we anticipate a tough few months and years ahead.

Despite this situation, we will look for inventive ways to serve our readership with digital content and of course also in print!

We therefore ask our readers, if they wish, to make a donation of £1 or more to help cover our running costs. Thank you, we hope you can help!