Rangers Roundup: Kakko on IR, Barron up, Kreider named NHL star of the week, and more

The New York Rangers announced several roster moves in preparation for their matchup against the Los Angeles Kings.

Adam Huska has been recalled from the Wolf Pack and added to the taxi squad. In addition, Gord Murphy has cleared COVID protocol and will rejoin the coaching staff tonight.

Jarred Tinordi was placed on waivers and has been moved to the taxi squad. Meanwhile, Kaapo Kakko is on IR with an upper-body injury that head coach Gerard Gallant labeled “week-to-week.”

UPDATE: Morgan Barron has been recalled from the taxi squad and Jarred Tinordi has been assigned to the taxi squad. Kaapo Kakko was placed on IR (upper body).

Barron, 23, has an assist in six NHL games this season. The forward has been mostly used as a center in Hartford, but can also play on the left wing too. His versatility will likely be utilized on the third or fourth line if he gets into the lineup.

“We’ve got different options if we go with seven (defenseman) or four lines,” Gallant said about the possibility of Barron coming in.

Barron was the 174th overall pick by the Rangers in the 2017 NHL Entry Draft. He’s recorded 12 points in 20 games with the Wolf Pack this season.

“I like playing six D,” Gallant expanded. “But if you got someone banged up and you’re not sure, you play 7 D.”

Gallant was also asked about keeping Artemi Panarin with Chris Kreider and Mika Zibanejad. He noted that they will likely stay together tonight. 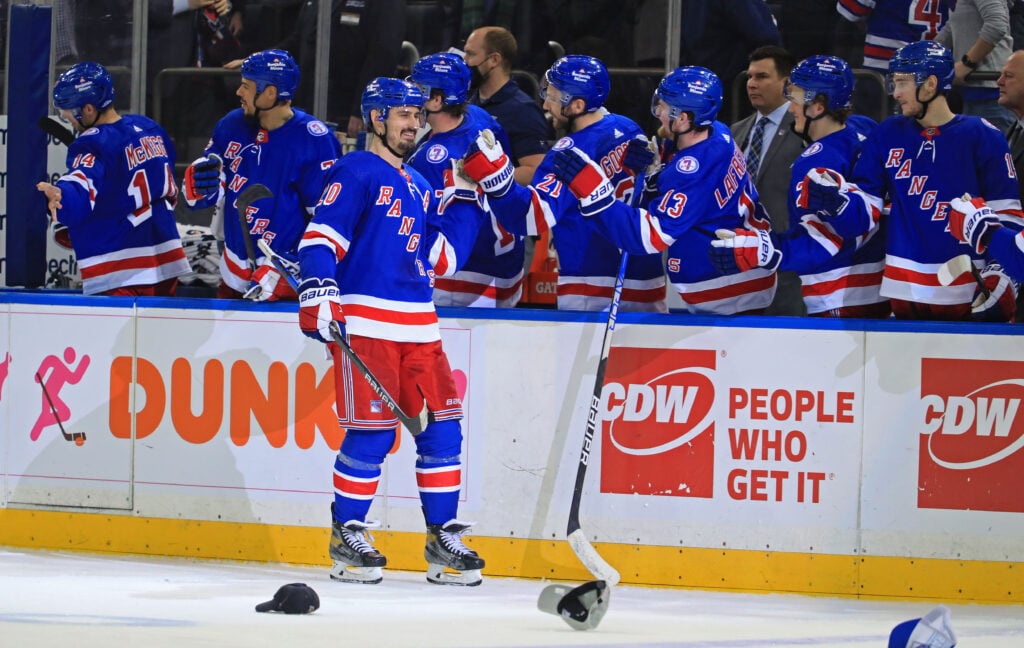 Almost two years ago, Chris Kreider was a candidate to be traded before eventually signing a seven-year contract extension.

Now Kreider is tied with Alex Ovechkin for the league lead with 29 goals and he attempts to continue his surge Monday night when the New York Rangers host the Los Angeles Kings.

Kreider pulled into a tie with Ovechkin on Saturday when he sparked a 7-3 win over the visiting Arizona Coyotes on Saturday. He scored for the fifth straight game when he notched his fifth career hat trick by getting his first career short-handed goal, his 14th power-play goal of the season and an even strength tally.

The NHL announced that Kreider is their Star of the Week with 5 goals and 2 assists in three games.

Is Martin Jones fit in goal for the Oilers? How will Vegas approach the trade deadline, and Rangers called on Bruins’ DeBrusk. read more