Holly Smith of New Jersey was on the cusp of making her dream business a success when the COVID pandemic threatened to turn it into a nightmare.

That’s no overstatement, either.

“Everybody told me if you can just make it to year three, that’s when your business will really take off,” Smith told Fox News Digital in a phone interview this week.

While the restaurant business is a notoriously tough one for startups, for Smith, it looked like the stars were aligning.

Despite the generally poor odds of success for new restaurants and a 2019 divorce that left her in considerable debt, her neophyte shop in New Jersey was turning a small profit.

Ever since she was 21, she’d dreamed of owning her own restaurant. She invested all of her savings to make her little shop a reality.

Holly Smith, left, with daughter Megan, at Smith’s Designer Dawgs restaurant. Smith opened her shop in 2017 and has managed to hang on throughout the pandemic. A hot dog with blue sprinkles, served in honor of Autism Awareness Day last April, is shown (Holly Smith)

“The first two months of that winter before the pandemic were great,” Smith said. “I was so excited. I was finally doing well, even in the winter,” she added.

She said that her sales in January 2020-February 2020 were triple that of her first two winters of operation.

Before the pandemic hit, Smith partnered with a local program for teens with special needs. Some students from Voorhees High School’s Unified Club and Sports program worked at Designer Dawgs as part of this program.

They interacted with customers while learning work and life skills. Smith’s daughter, Megan, was president of the club.

A few months later, however, pandemic-related mitigation measures shut down schools and businesses. Restaurants were moved to takeout only. 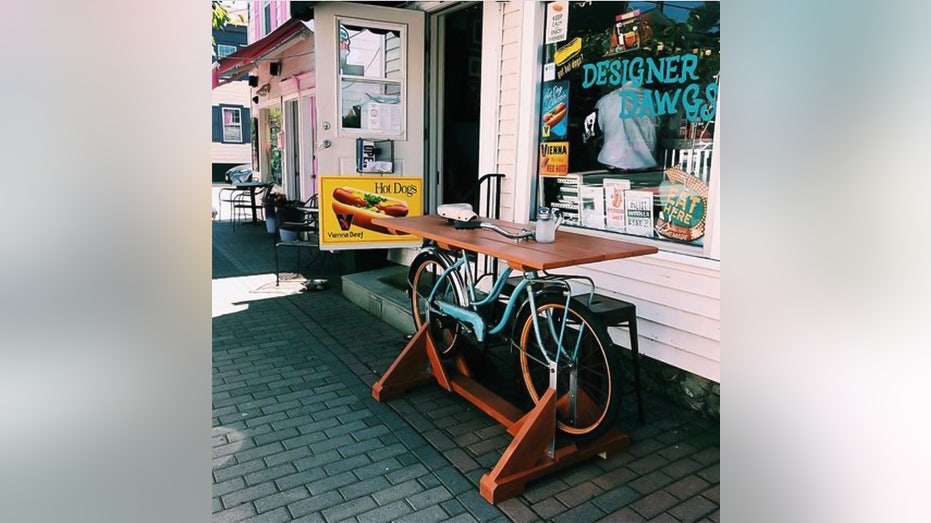 Outdoor dining at Holly Smith’s Designer Dawgs restaurant in Clinton, New Jersey. “Sometimes,” Smith told Fox News Digital, “I can’t believe I made it through all of this.” (Holly Smith)

It also meant the end of the Unified students’ opportunity to work at their shop.

“It was so desolate in Clinton that ducks were literally sleeping in the street in front of my shop,” said Smith. “There were no cars there to disturb them.”

She would periodically shoo them out of the street just in case, she said.

“Sometimes, I can’t believe I made it through all this. Most people would’ve closed their doors and locked up,” she added. 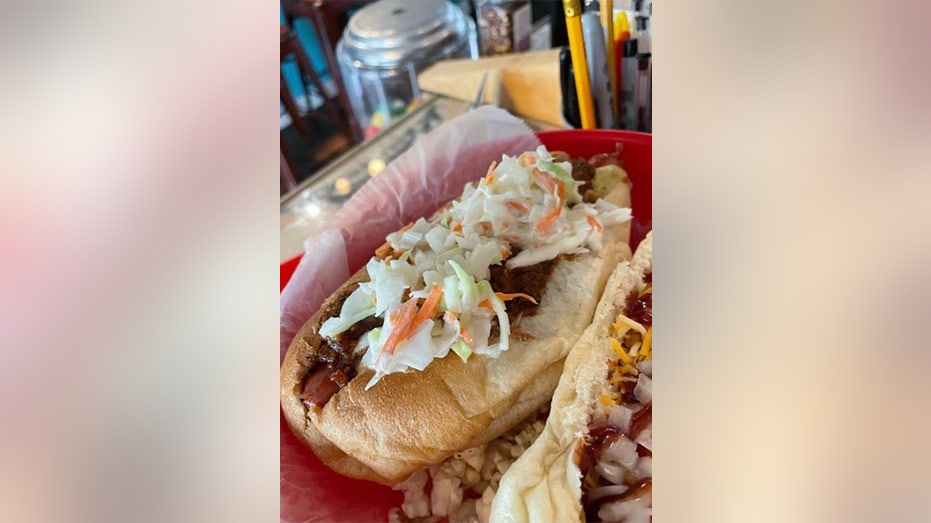 A specialty hot dog is served up at Holly Smith’s restaurant in New Jersey. (Holly Smith)

She also said, “I had a growing business, but my income was cut down to pretty much nothing for March and April. The pandemic crushed my numbers and I took a loss in 2020.”

By March, staying in the restaurant business — at least for Holly Smith — was touch and go.

Not only was indoor dining banned, but the rules and regulations regarding takeout were unclear, both to restaurateurs and to the officials and authorities charged with enforcing them.

Early on in the pandemic, for example, Holly Smith was alone in her locked shop, watching Netflix. Whenever she needed to prepare or deliver food for the occasional order at her walk-up window, she put on a mask.

Once, a police officer knocked on Holly Smith’s takeout window, telling her that she needed to wear a mask at all times inside the restaurant — even while she was alone.

Once, a police officer knocked on her window, telling her that she needed to wear a mask at all times — even while she was alone.

“He was doing the best he could,” Smith said of the officer.

Smith, however, confirmed with the local Board of Health that if she were alone in her shop and not actively cooking food or dealing with customers, then there was no need for her to wear a mask.

Another example of the challenges she faced: When Smith told her significant other, Scott Goldberg, that she had to install a plexiglass barrier at her counter, the clever carpenter got creative. “Give me a day to think on it,” he told her. 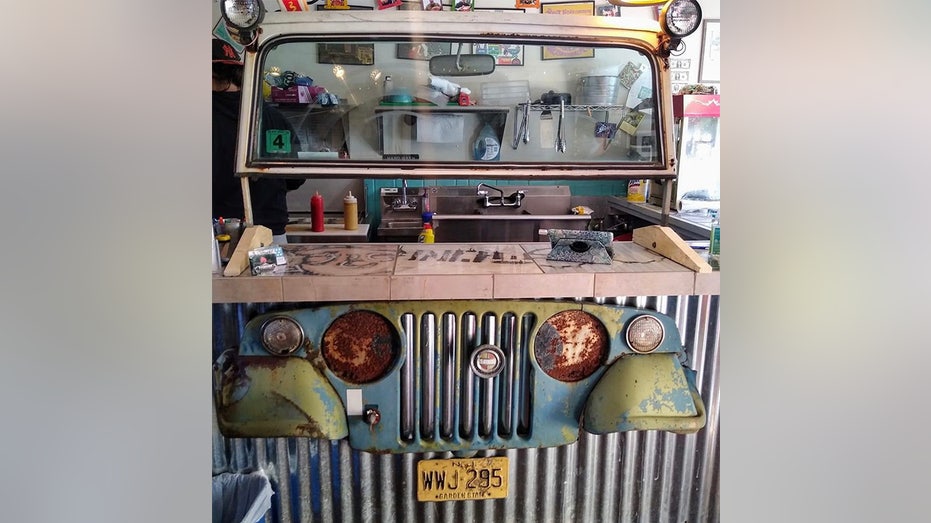 Holly Smith’s significant other built this for Designer Dawgs early on in the pandemic, when Smith had to install a plexiglass barrier at the counter. “Customers loved it,” she told Fox News Digital. (Holly Smith)

A few hours later, he began installing a windshield that he crafted from parts of an old Jeep.

Though restrictions on dining in the Garden State have been lifted, Smith told Fox News Digital she believes people are still hesitant to dine indoors even now, as omicron cases drop.

As a result, she brings in other employees to work only during some weekends — and she’s also had to cut back the hours her shop is open.

“Last winter, because people did not want to be inside, [business] was not good,” she said. “And this winter it’s been even worse.” 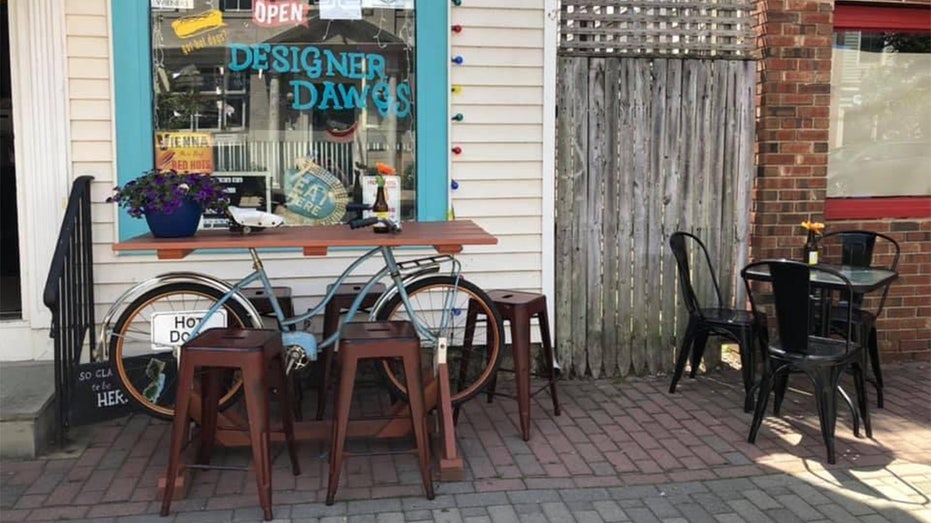 Another outside view of Designer Dawgs in Clinton, New Jersey. Holly Smith’s restaurant was ranked No. 21 among the Garden State’s more than 200 hot dog joints in a NJ publication survey. (Holly Smith)

She said that due to the omicron variant, “many people are scared again” — even now, she said.

“It was about to be my best year. Even though I’ve rebounded [since the start of COVID]I think it would have been so much more,” she said.

Smith and other local restaurateurs found creative ways to pull together during the worst of the pandemic. In April 2020, Smith launched a promotion in which patrons could buy a “kit” as part of a contest to create the best new hot dog recipe.

The kits contained items from other struggling restaurants in the area.

“Customers told me it was the most fun they’d had during the shutdown,” Smith said of the “Chopped”-inspired activity.

Hope for the future

Smith was not about to let the pandemic kill a business she’d worked very hard to build.

Recently, for a previous National Hot Dog Day in July, Designer Dawgs was ranked No. 21 among the state’s more than 200 hot dog joints in a New Jersey magazine survey.

Though Smith says her credit card sales this past December and January were the lowest they’ve been since she opened, she is determined to continue working toward her dream.

She owes her business’s survival, in large part, to her loyal customers, she said.

“I truly believe, once this is over, that I’ll be busy again,” she said. “My customers love me and I love them.”

Academy Bus to pay $20.5M after being accused of defrauding NJ Transit for years