MANCHESTER – At one time, according to the Ocean County Democratic Organization, the township had the largest Democratic Club in the county. Now, Manchester Democrats are reforming and during their first meeting, they invited their Republican mayor as guest.

“I restarted the Manchester Township Democratic Club this past summer,” Merrill Lindeman-Aptsiauri said. “I began by hosting meetings at my home this past summer. Our guest speakers were candidates who were running for office in New Jersey.”

She added, “I quickly realized that I connected well with one of the early members, Kathy Frisch. Since then, she has been a wonderful partner in helping get this club off the ground during a pandemic.”

Aptsiauri said Frisch “worked with the Ocean County Democratic Organization in the past, first for the Obama campaign in 2008. They also managed several other local campaigns and supervised their Toms River campaign office.”

She noted that Barbara Estok, another early member, “brings a lot to the table, with her past in politics in Middlesex County, where she was the aide to a freeholder and a committeewoman in that county.

I owned a small business in Somerset County for 20 years. My background is as a people person. I became more interested in politics in 2015 when Trump came into the picture.”

The group’s live meetings quickly outgrew the social distancing requirements of the pandemic, so they moved to the Lakehurst Community Center where they hope to return soon. 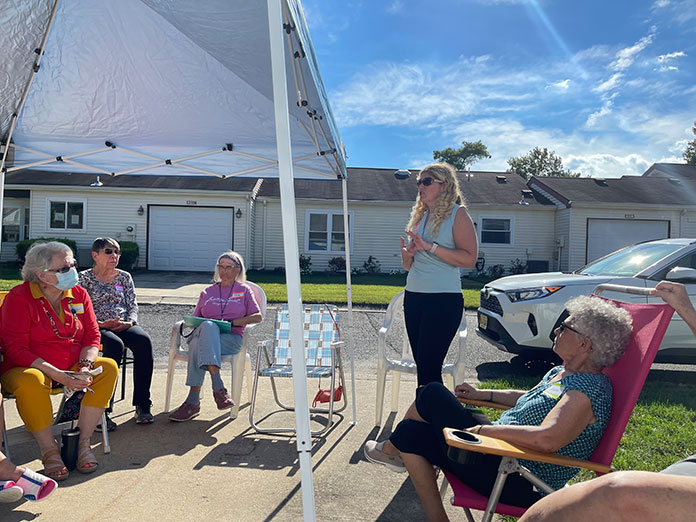 Their January meeting was virtual and their special guest speaker was Mayor Robert Hudak who provided an overview of the status of the township. Hudak responded to a variety of questions ranging from cell phone tower placement, new developments, land preservation and bringing new businesses into the community.

“As you know 2021 was a really crazy year. We had a lot of changes in the township. A new mayor obviously, new police chief, new council member, new business administrator so there has been a lot going on recently,” Mayor Hudak said. “I want to assure everyone the state of the township is we’re doing well. We are moving forward with a lot of initiatives and trying to continue the progress we’ve already been engaged to.”

He noted the Whiting cell phone tower saying, “That is a project that has been going on for quite some time. COVID has unfortunately delayed some of the delivery of equipment but I am happy to report that we were told by Verizon that by March, they will install the equipment on the tower. We’ve also been contacted by AT&T and they are looking to locate their equipment on the tower as well and the hope is they will be installing theirs by the end of 2022.”

The mayor also said the restoration project at the Bowker field in Whiting had also been completed and included basketball and tennis courts and upgrades to the baseball field there. He noted the staff engineer won an award for the design work for that project.

“The Manchester water tower has also been completed and the goal is that we will no longer have water restrictions in the eastern service area this summer as we have had for many, many years,” Mayor Hudak added.

Regarding work at a former township landfill, the mayor said, “This was closed for about 30 years, it is not the recycling center. It is the older portion of it.” He said work on a solar array on that portion of the landfill is the next step and the facility needs to be capped “as we’ve been requested to do for the past 30 years by the DEP (Department of Environmental Protection).”

Mayor Hudak added, “that is coming to a head at this point and hopefully, by the end of 2022, the solar array will be erected and we will be able to move forward with that project.”

He also spoke about the Surf & Stream property “that we – together with the county – we have been able to purchase that property for open space purposes. This would stop over 245 units from being built on that site. I am very excited about this project. Open space is near and dear to my heart.”

In talking about the newly formed Manchester Economic Redevelopment Advisory Committee, he said the group’s goal was to “really look at opportunities in Whiting where we can utilize some of our existing resources and bring in some new businesses. I’ve had some discussions with Aldi, Lydl and some of these other retailers about coming into Whiting.

“I know at the Whiting Commons Shopping Center there will be an application that will be coming in to bring restaurants to the area. I also talked to a developer about a possible car wash,” the mayor added.

He touched on other subjects such as work on addressing flooding issues in Pineland Park and utilizing grant money that was available.

Questions For The Mayor

Group member Pam Quatze asked the mayor about the Surf & Stream Campground. “I’m a housing advocate and I know as in other campgrounds that the campgrounds there, many people live all year round. I realize a lot of the housing there is sub-standard. Nonetheless, where are those folks going to go who are being displaced?”

Mayor Hudak responded, “They are not supposed to be living there. They really are living there illegally. There has been a lot of back and forth with violations over the years with the owner. They would have been displaced but at least this way we can get involved and help them, so we will work with organizations like STEPS and others and the County has really been taking a lead on this to help out.”

While Manchester’s form of government is non-partisan in the manner of its elections, it was noted that partisan politics still exists. Also noted was the fierce campaign that took place last fall between two factions of the Republican party and which may well take place again this year when Hudak runs for a full term.

The mayor was asked by another member how he would lead the township in a non-partisan way “given he gives broad support to Republicans?”

“A lot of the issues that face us aren’t Republican or Democrat. They are common sense issues. I am a registered Republican. I wasn’t elected simply as the Republican mayor of Manchester which is why I am here today. I’m mayor of Manchester I represent and work for all the residents not just some. I always look out for the best interests of the town. It isn’t about the best interests of a political party,” Hudak said.

Aptsiauri told The Manchester Times, “We have not yet held elections within our club. It will have to wait until we can have a couple of meetings in person again. Our main mission is to get the Democrats of Manchester Township active in local politics and to get them out to vote in every election.”

“We have a guest speaker at the start of each meeting. Afterwards we discuss ways to accomplish our mission, and discuss current events. Anyone who is interested in joining our club should email us at [email protected] I also ask them to join our FaceBook page, called Manchester Township Democrats,” Aptsiauri added.

The club’s next meeting will be held on February 26, at 10:30 am most likely via Zoom according to Aptsiauri.

“We will be discussing, with Marta Harrison and possibly (Ocean County Democrats Party boss) Wyatt Earp the filling of the County Committee positions for Manchester Township. Each of the 40 voting districts in Manchester has two representatives. The deadline for filing is April 4,” Aptsiauri said.