While the city of Troy features prominently in “The Gilded Age,” HBO’s new ten-episode historical drama series set in the 1880s, other areas of the Northeast have behind-the-scenes roles, though they don’t actually appear on the show. These include Brooklyn, New York; Red Bank, New Jersey, and Manhattan, through the re-enactment of an icon in African American media history – T. Thomas Fortune (1856-1928), publisher, editor, journalist and businessman.
Harlem’s Sullivan Jones, the actor who portrayed Mr. Fortune in three episodes of the series, lives in Brooklyn, where the black journalist legend lived before moving to Red Bank in 1901. Fortune’s historic newspaper, The New York Age, was printed in Manhattan. In this first of our two-part series, written by Fern E. Gillespie, Our Time Press takes a journey through time, beginning at the site of the actual Fortune family Victorian mansion, now one of New Jersey’s cultural hearts. This is where Mr. Jones traveled to get inspiration and research about this iconic figure. (Part 1 of 2)

Gilda Rogers, a co-founder and executive director of the T. Thomas Fortune Cultural Center in Red Bank, has spent years at the forefront of lobbying governments and corporations to save the home of legendary 19th- and 20th-century journalist and civil rights activist T . Thomas Fortune (1856-1928). From the 1880s through the 1920s he was editor-in-chief of America’s largest black newspapers, The New York Globe, The New York Age, and Marcus Garvey’s Negro World. He was a colleague of WEB DuBois, Ida B. Wells and Booker T. Washington.

ALL STARS: Once owned by civil rights activist T. Thomas Fortune (below left), the leading media mogul and respected journalist of his day, this majestic Victorian building is considered the jewel of Red Bank, New Jersey. It also features prominently in the world of conservationist Gilda Rogers, a nationally known and respected journalist who is co-chair of the T. Thomas Fortune Cultural Center housed in the building.

In 1901, Fortune moved his family from Brooklyn to a stately Victorian mansion in Red Bank, NJ’s prominent black community on the Jersey Shore. He named the house Maple Hall and lived there until 1911. Although it was designated a National Landmark in 1976, preservationists tried to save the decaying building, which the new owners wanted to sell.
In 2013, Gilda was a leading advocate of an agreement with developer Roger Mumford to restore the Victorian building and build a Victorian apartment complex around the building. When the T. Thomas Fortune Cultural Center opened in 2018, it became a leading institution on the Jersey Shore promoting and preserving black culture. Our Time Press spoke to Gilda about the center’s Afro-Futurist-Victorian design.

OTP – You led the design vision of the T. Thomas Fortune Cultural Center. You are best known as a journalist (reporter for the Asbury Park Press and editor-in-chief of City News, New Jersey’s largest black weekly) and director of community affairs for the Two River Theater in Red Bank. What is your design background?

Rogers – Before becoming a journalist, I studied Fashion & Visual Merchandising and Interior Design and graduated from Roberts Walsh Business School, which is long gone. I also took some classes at FIT. I then worked for 15 years as a window dresser for large department stores and specialist shops. A lot of my exhibition work was also related to interior design, especially in department stores, which at the time had bedroom and living room simulations.

OTP– What was your interior design vision of The Fortune House? How did you coordinate and arrange the antique furniture?

Rogers – Robin Blair, one of our board members, donated some of the chairs that mark a specific time period and we thought it would be a novel concept to reupholster them with African designed fabrics to bring the two cultures together. We had actually approached a renowned interior designer to work with us. However, their vision was very different from ours. She didn’t see what we did. We wanted the home to reflect black culture from the moment you walked in the door. We broke up with her quickly. I relied on my own interior design experience and we went from there. Some of us traveled to Montclair where we bought a lot of African inspired fabrics and motifs. Of course, several people wanted to donate to us. They seemed to think if it was something old we should have it. However, we were very picky about which pieces of furniture we accepted to furnish the house. The T. Thomas Fortune Room has a large, poster-sized sign welcoming you to A Cultural Textile Experience. Fortune’s space reflects and showcases an Afro-futuristic design that is appealing and appreciated by all who visit the home. My co-creators were Birgit Mondesir, Robin Blair and Kathy MacAuley who are all board members.

OTP – Why was it unique that Fortune House organizers worked with developer Roger Mumford to restore the house and create a Victorian apartment complex?

Rogers – Roger Mumford was developer and financier of the T. Thomas Fortune Cultural Center. He donated the home to the T. Thomas Fortune Foundation for $1 to operate as a cultural center, bringing people together to root out injustices in our society. If we can begin to understand one another and form relationships that embrace and encourage different perspectives, as opposed to one point of view, perhaps we can begin to build trust and understanding between races. It’s a challenge, but I’m grateful to Roger Mumford for being someone who cares about humanity and what it should represent.

OTP – What are the special rooms in the T. Thomas Fortune Cultural Center?

Rogers – Adjacent to the Fortune Room is the Ida B. Wells Gallery, which houses our current exhibition, A Love Letter to Count Basie: From The Great Migration to The Harlem Renaissance. I’m working on an upstairs exhibit honoring the Parker family. Ancestral Ascension is the title of this exhibit that honors a family of black doctors, educators and community leaders. It is scheduled to open at the end of March. And there’s the Carrie Smiley Fortune Research Library, dedicated to Carrie Fortune, wife of T. Thomas Fortune and one of the founding members of the National Urban League.

The T. Thomas Fortune Cultural Center is open to the public on Saturdays and Sundays from 1:00 p.m. to 5:00 p.m. For more information on events and programs: www.tthomasfortuneculturalcenter.org 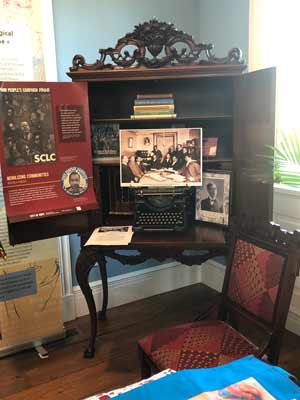 Monument preservationists, including Gilda Rogers, conducted a successful effort to save the T. Thomas Fortune House in Red Bank, NJ from destruction. In 1901, Fortune and his family moved to Red Bank from Brooklyn. Antique furniture, not the originals, has been revisited with contemporary African fabrics by Gilda and other designers in honor of the publisher’s civil rights activism. Born a slave and freed after the Civil War, Fortune rose to become a journalist, editor and publisher of the first nationally syndicated African American newspaper. Fortune also founded the organization that later became the NAACP. He was a colleague of the most influential leaders of the time, including Booker T. Washington, W.E.B. DuBois, Ida B. Wells, and Marcus Garvey. Fortune wrote for The Amsterdam News. He also served as editor of Marcus Garvey’s Negro World. (Image credit: Fern E. Gillespie)