opponent track: New Jersey recently snapped a streak of seven consecutive regulation losses (January 25 to February 7) by scoring seven goals each against the non-contending Montreal Canadiens and wild-card St. Louis Blues. Six times during this 2-7-0 stretch, the porous Devils have allowed four or more goals against.

Pen’s Path Ahead: After the Penguins face the Devils this Sunday and the Flyers on Tuesday, they’re set for a competitive month. Over the next three weeks, the Penguins face serious playoff threats in the New York Rangers, Tampa Bay Lightning, Florida Panthers and Carolina Hurricanes (twice!) This month will be a test of how playoff-ready this team really is.

Hidden Stat: In nine contests against division opponents this season, the Penguins have picked up 13 of a possible 18 points (6-2-1). The Devils have spent a lot more time in the Metropolitan Division; they’ve played 16 contests and claimed 16 of their possible 32 points (7-7-2).

Trivia Question: Today’s trivia question is courtesy of Pens PR. As you may have heard, Sidney Crosby currently sits at 499 career goals. His next will mark the second time in Penguins history that a pair of teammates scored their 400th (Jeff Carter, October 14) and 500th goals in the same season. Who were the other Pittsburgh skaters to notch these side-by-side milestones?

Season Series: The Penguins and Devils have split the season series so far, with the Devils emerging victorious from a contest in PPG Paints Arena on October 30 (Danton Heinen opened scoring, but a shorthanded goal from Jimmy Vesey in the final minutes of the second period and a penalty shot from Jesper Bratt toward the end the third frame powered New Jersey to a 4-2 win) and the Penguins getting their revenge on December 19 at Prudential Center (Teddy Blueger opened scoring on a shorthanded goal, and Mike Matheson’s third-period strike sealed a 3-2 regulation triumph.)

SBN Counterpart Blog: It’s all about the Devils at All About the Jersey.

—The Devils have iced six different goaltenders this season. After Jonathan Bernier was forced to get season-ending hip surgery, Mackenzie Blackwood was given the brunt of the New Jersey workload; now, Blackwood is on the IR with a left heel injury, and the Devils are rotating between Jon Gillies (a fringe NHL and mostly AHL goaltender since 2016-17) and Nico Daws (an NHL rookie with three games under his belt.)

—Jack Hughes will return from COVID-19 protocol after missing three contests after the All Star Game, adding to an unfortunately long list of absences (he has skated in 28 of the Devils’ 48 games.)

The Devils’ best player will be out Sunday

Just 45 games into 2021-22, Jesper Bratt already surpassed his career-best season points total with a nearly point-per-game production pace. He’s the best producer in New Jersey, and it’s not even close— Bratt has recorded 43 points, while all the other Devils are yet to clear 30.

From All About the Jersey:

Bratt has been nothing short of spectacular this season, with 43 points in the 44 total contests he has appeared in, again with all 43 points coming in his last 39 appearances. Bratt and Jack Hughes are the only Devils to be at or anywhere near a point per game or better, and with Jack having missed roughly half of the games so far due to injury and illness, the greatness of what Bratt has achieved so far should not be understated.

But Bratt is out with an upper-body injury Sunday, and Jack Hughes, usually a center, will be taking his place as a top-line winger. From NHL.com:

A line of Sharangovich, Hughes, and Hischier puts three natural centermen on one line. Sharangovich has played the majority of his Devils career on the wing, both Hischier and Hughes have played the bulk of their young careers at center. In a different way, there is diversity in pairing the three together.

“I had a conversation with Nico,” Ruff shared after practice on Saturday, “Where you know, Nico can go on the wing, Jack can be in the middle, You’ve got really three guys that have played center with Shar, Jack , and Nico.”

And now for the pens.. 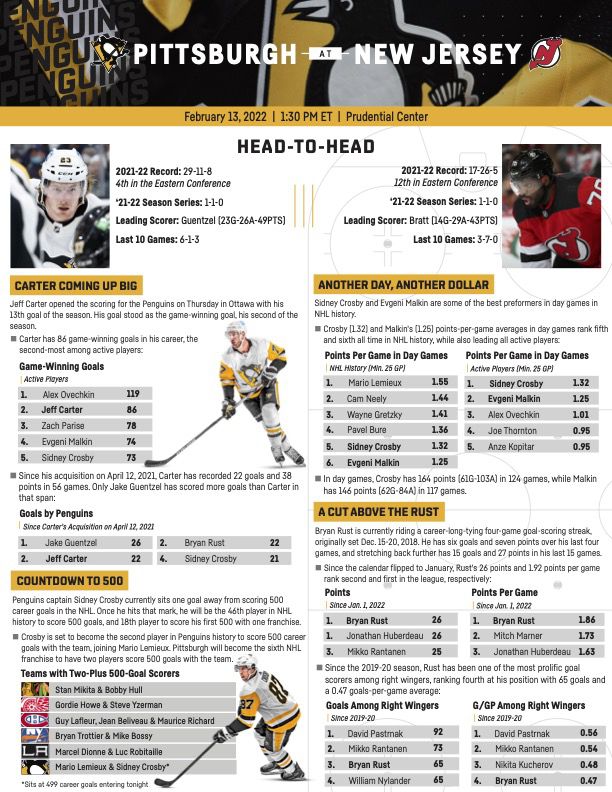 —Michael Chaput and Valtteri Pusstinen were returned to Wilkes-Barre/Scranton on Saturday in the wake of Malkin’s expected return.

—Drew O’Connor was taking line rushes during Saturday’s practice, according to Pens Inside Scoop.

—According to Pens PR, Crosby and Malkin are the two most productive active NHL players during day games, with 1.32 and 1.25 points per game, respectively.

You can probably already guess what milestone we’ll all be watching for on Sunday: Crosby is one strike away from scoring the 500th goal of his illustrious career.

In other milestone news: